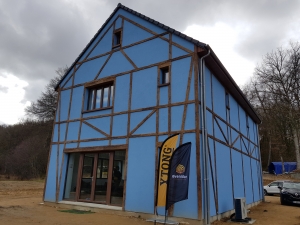 The company KZB, specialized in buildings with very high energy performance and based in Seine-et-Marne, plans to install an antenna in the future business area of Ahun. Since 2008, KZB has challenged itself to build the first house in the world certified "passive Premium" and 100% autonomous.

The "demonstration house" of this project, called Avenidor, was built in Ahun and is attracting increasing interest. As Steven Kaszuba, designer and project manager, reminds us: "This house requires no heating system, no air conditioning, it produces electricity, water treatment, manages wastewater and even generates its own internet network". Such a construction requires to obtain these energy performance a specific material which has remarkable thermal properties. The choice of designers at Avenidor focused on "Ytong cellular concrete".

During a meeting on the site, last week, in the presence of several journalists from the press specializing in construction and building engineering, the project manager Steven Kaszuba assisted by Arnaud Porte and François Chardon (Ytong Cellular Concrete), presented the characteristics of the material and its thermal and insulating performance.

The "passive house" from Ahun will not remain a prototype, marketing began in January in all of France but also in Belgium and Chinese visitors, who made the trip to the Creuse were seduced by this concept ... "revolutionary", of construction. 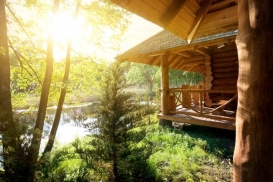 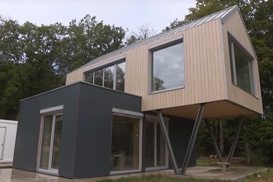 After 2 years of research and development, the company avenidor presents its new range of biosourced passive houses: aria!

See all our news

AVENIDOR was born from our determination to develop and build passive buildings in line with sustainability, performance and the environment.

Cookies are small text files stored on your computer. Some cookies are in place so that the website works properly, for this reason we may have already put some cookies on your machine. They also allow us to give you the best possible browsing experience and help us understand how you use our site.

By continuing your visit to this site, you accept the use of cookies to analyze the traffic of our site.